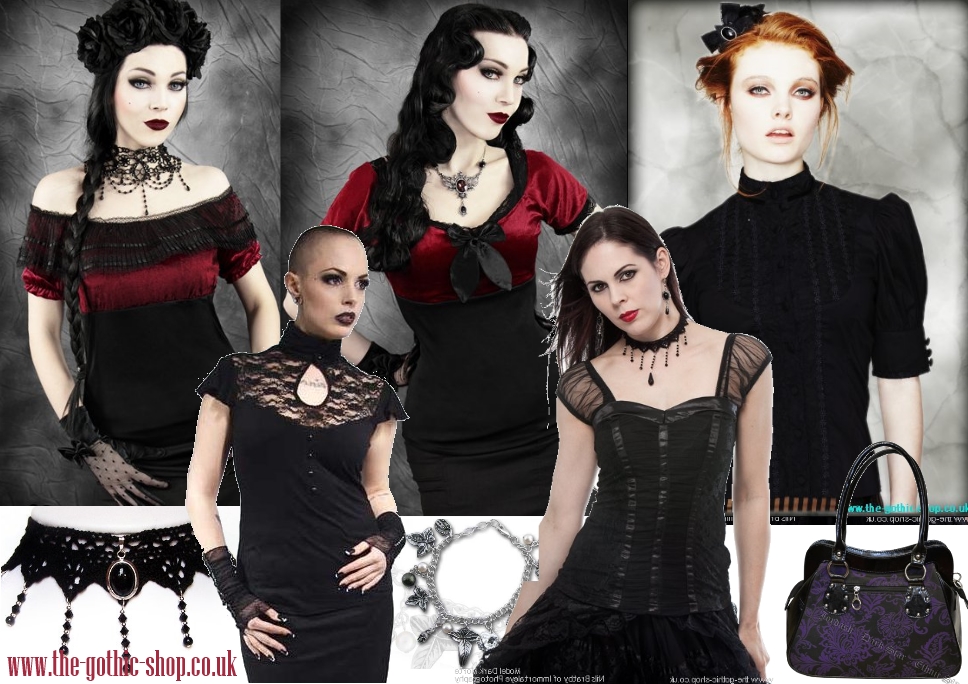 As grey winter skies fade and the sunshine burns through it's time to drop heavy jumpers and peel the
layers back week by week in favour of pretty blouses.

We love the elegant simplicity of this stylish Victorian blouse, mix with Steampunk or Victorian styled long skirts.

You can feel the dark romantic influence with this Bohemian Burgundy Velvet blouse by Restyle, worn alone or under an underbust corset, this top gives you the opportunity go all out on accessories with beauties like this Black Onyx Lace Choker.

This textured burgundy velvet top is ticking all the boxes as we indulge in a bit of pinup playfulness.

There's no need for jewellery with this pretty Nepthys black jersey top which features lace across the chest and back with a keyhole finish, pair with tight black jeans for an ultra-sexy look.

This Black lace bodice will certainly get heads turning and accentuate your assets, worn on or off the shoulder to reveal your softer side.

The Gothic Shop has a extensive collection of blouses to mix and match to get the perfect look.
Posted by MyKindaStyle 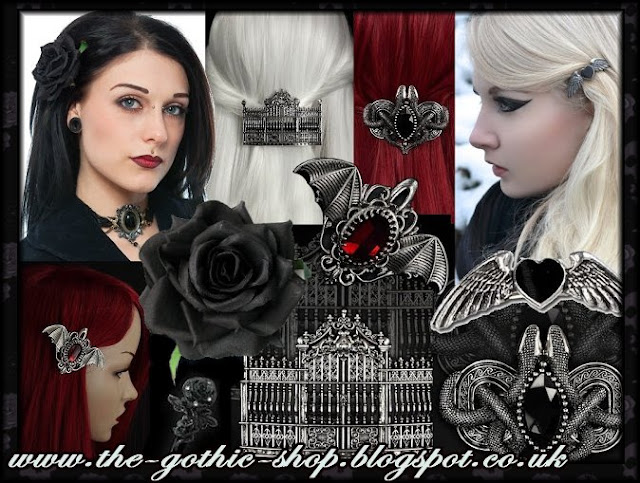 Nobody can deny Goths are well known for their gorgeous and unique style of clothing. But hairstyling also plays a very large part in perfecting the appearance.

Romantic Goths, Victorian, Medieval and Cabaret Goths  tend to favour more seductive, sensual styles which work well with long hair so we have put together a simple collection of inspired hair accessories.

So make sure you stock up on elegant slides, unique hairbands and breath-taking grips for a million ways to work easy spring/summer goth hairstyles.

Whether you're wearing it up or down, this Coeur Noir Hair Clip by Alchemy is just what you need to add a simple touch of romance to your look.

This Bat Restyle Hairclip with a red blood polished glass cabochon set within antique silver frame is a  surefire way to spice up your favourite hairstyles. From a traditional ponytail to wearing your hair down with a side parting.

We’re particularly taken with this Snakes of Avalon Hairclip which features a large black ellipse cabochon set in a highly detailed antiqued silver-tone pewter frame detailed with a pair of entwined snakes.

Hats can be very boring so a great youthful alternative is a fascinator, like this Silk Black Rose Clip. Opt for darker shades, to give your outfit the glam factor.

If you love the 'half updo'  a strict and smooth centre part is the key to this Medieval inspired look. Pull hair back on either side of the head, making sure the ears stay covered, before securing with something eye-catching like this Devine Gate Hairclip by Restyle.

For more ideas take a look at all the hair accessories available at The Gothic Shop.  To stand a chance of winning one tell us your favourite either as a comment below or in a mention to us on twitter @thegothicshop.  Winner to be announced 31 March 2013.  Good Luck!
Posted by MyKindaStyle

Gothic and The Fetish 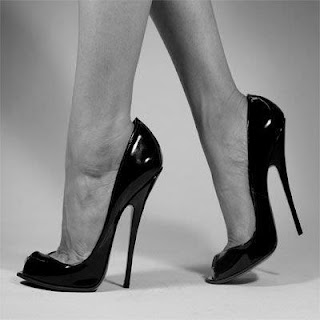 What is a 'fetish'? and why do so many people get confused between Gothic and those who indulge in their fetishes? Are the two in fact the same thing?

Firstly we must establish what a fetish actually is. It is loosely defined as the 'worshipping of an inanimate object or of an action'. These objects or 'rituals' could have a magical quality or in so many cases a 'sexual' power. Whatever it is, this is what will make it valuable. Top fetishes include flat tummies and thigh high lace up boots. Studies into fetishes show that men in particular reportedly love the feel of latex, vinyl and rubber on their partners.

But what has all this got to do with the Gothic lifestyle you maybe asking? There is no doubt about it, the Gothic 'look' has long been strongly associated with the world of sexual fetishes. It's been so long that so many people confuse the two as the same thing. Does this drive you a bit crazy? Are you fed up of people asking you what your 'fetish' is? After all Gothic is a lifestyle and not just about sex right? But maybe there is a tinsy winsy part of you that might like the idea of being a kinkster?

Black is the colour: Traditionally Black has been associated with all things Gothic. It's what women first wore during Victorian times while in mourning. Nuns also wore mainly black habits. Thought of by some to express a non-sexual existence without temptation.  Perhaps this is why both Gothic and fetish lovers adore it?  Black is no longer associated with resistance to all evils! Rubber outfits and accessories are available in all colours, but black latex has a particular allure to it. There is the mourning aspect to black but also the dark sumptuous side too. We can't help but love it! 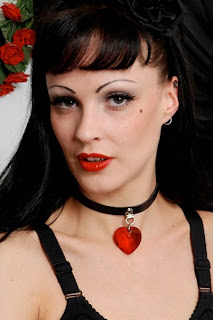 Leather and Latex: This is where there is a real cross over between the two worlds. It's the look of either fabrics that gives a Gothic feel to any outfit. But this is the same for people who want a fetish inspired outfit. While everyone loves their leather jackets and latex tops. Fans of the fabric fetish will wear theirs because they adore the look as well as the smell even of them.

Talking about the Tactile: As well as looking sumptuously sexy, many Goth fans will tell you that 'touch' is so important too. This is something that this lifestyle has in common with the fetish types. Most of us love the feel of things, velvet, silken pillows. Whether it is running your fingers over the ruffles of a lacey cuff, or the feel of a silky smooth corset. A fetish really could be a simple of a complicated as the desires of each individual. If you love rocking the Gothic as well as your material fetish then you have the best of both worlds instantly.
Posted by Unknown

Dresses fit for a Gothic Wedding 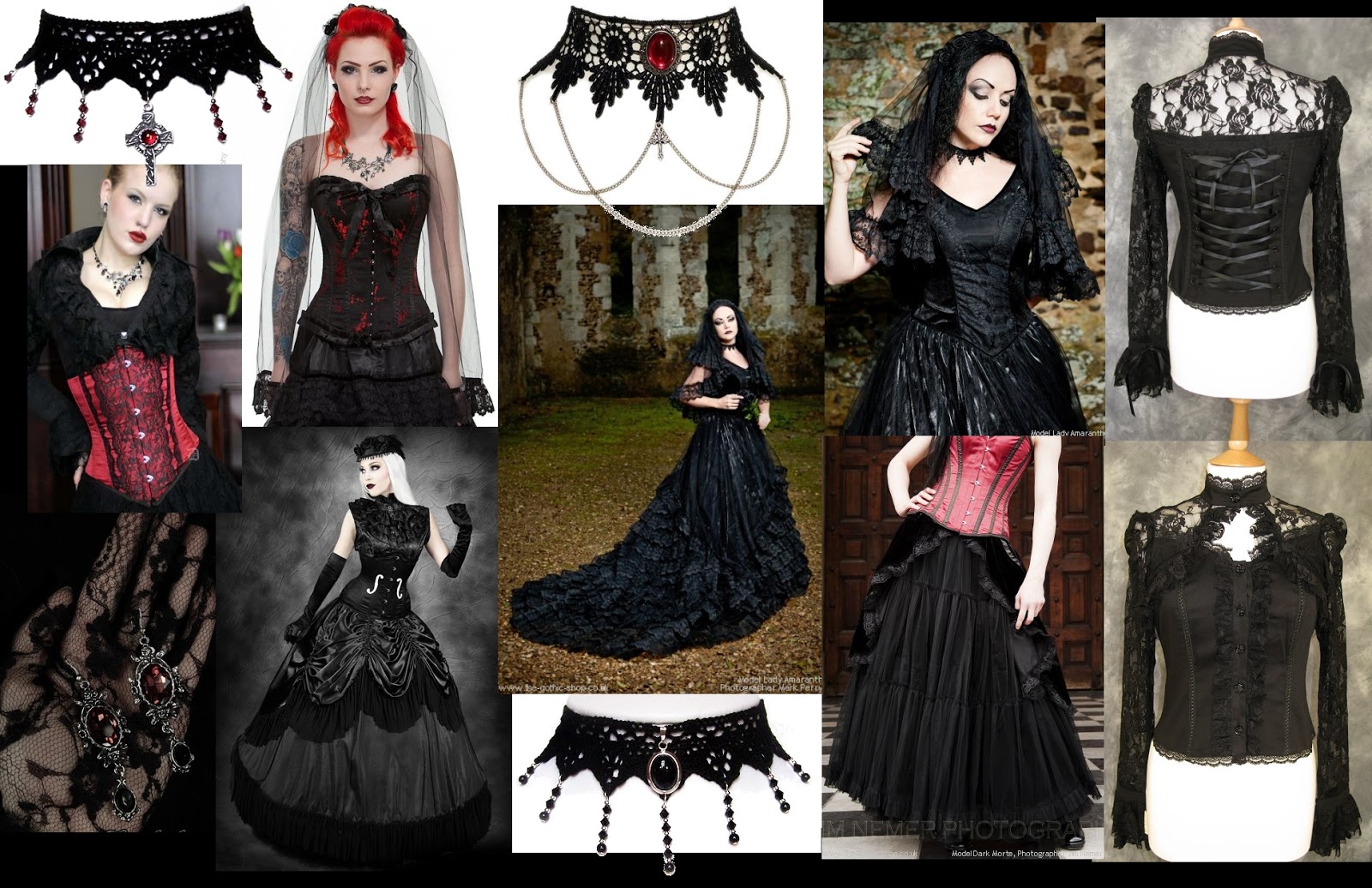 So since he has popped the big question, and if you are anything like us, you have been dreaming about your elegant and romantic Goth Wedding since you first met but now the real planning begins.

As we love all things dark and interesting make sure you embrace breaking tradition with goth themes throughout your day  and make it unique and special for you and your groom.

Did you know that  Queen Victoria actually popularised the trend for white bridal gowns when she wore the shade for her wedding to Prince Albert in 1840, many brides - including royals - had worn gowns in a variety of hues with heavily embroidered brocade gowns with silver and white thread, while others, especially in Western Europe, commonly wore red.

The Gothic Shop has an extensive collection of dresses, skirts and corsets to suit any style of wedding be it Gothic, Medieval, Vintage or Victorian. We have picked out a few wedding dress suggestions to get you started.

Our showstopper has to be this Sinister Black Gothic Wedding Dress made from over 90 metres of black lace combined with  taffeta, mesh and velvet. The bodice is made from black velvet, with mesh over taffeta on the centre panel and decorated with broad black lace along the seams. The skirt is made from black mesh tulle finished with black lace over a shimmery taffeta, and numerous frills of black lace.  This opulent dress also has a matching Sinister Black Mesh Wedding Veil to complete your bridal outfit.

Become Queen of the Night in an instant with this  beautiful black satin and taffeta skirt by Restyle. Pull the cords  to shorten the skirt and to ruche the satin skirt to your desired effect.  Combine with this Red Petal on Black Taffeta Lily Corset for a romantic feel or this Black Corseted key-hole blouse for an ultra-chic wedding look.

Go Medieval with the Opheilia Velvet and Lace Dress which is simple yet elegant in a flattering A-line design, made from black and burgundy-red velvet with a black lace overlay.  This beauty features adjustable black ribbon lacing and the dress is trimmed with black braiding and satin roses.

For a Victorian influence try this stunning Black Velvet Victorian Skirt with a splash of colour like this Red Lacie Underbust Corset.

All Wedding dresses can be accessorised with a selection of earrings and chokers.

Remember, the photos will be around for decades, so much better to go for something stylish and beautiful but essentially ‘you’!
Whether you're purchasing from The Gothic Shop with your wedding in mind, or you're looking for a party dress for this Saturday, you can use coupon code WEDDING to get 15% off your next order placed before midnight Wednesday 6 March 2013.
Posted by MyKindaStyle 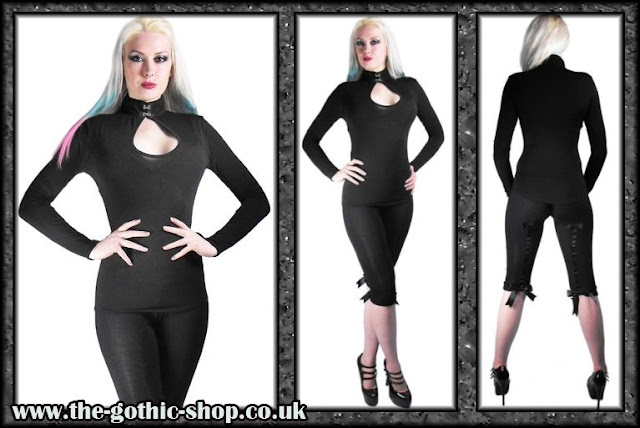 Earlier this week we restocked loads of our favourite Necessary Evil essentials, as shown below.  These included the Venda top which is perfect for this time of year....warm, yet sexy!  In the photos above this is teamed with the Aasith capri leggings which are finished with ribbon bows.﻿  These are great worn with the longer tops, or I wear mine with my favourite Hell Bunny mini dresses.  We also restocked the men's Chronus shirt and waistcoat which have been a hit amongst our male customers since we introduced them a few months back. 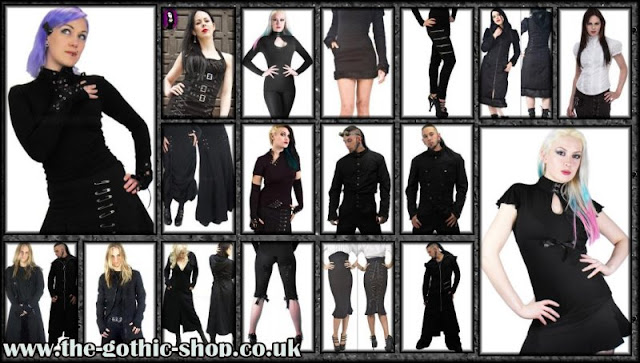 We also restocked loads of Chicstar skirts, jackets and blouses, including the velvet jacket with ribbon lacing down the back, which is available in black and burgundy.  Most of the gothic clothing shown below is available in sizes uk6-30.  If you're looking for clothing that fits you, don't forget to click on your size at the top left of the website..... and always refer to the size guides on the website to avoid returns. 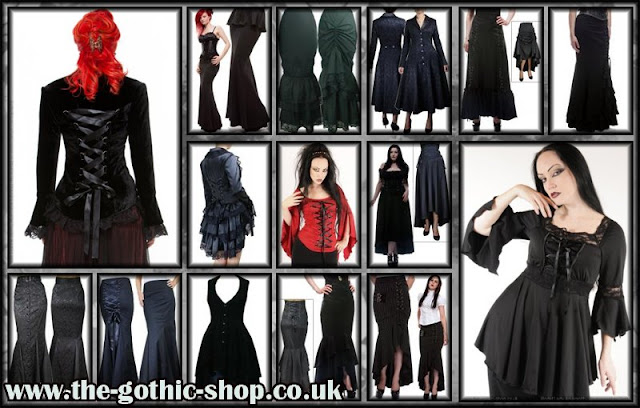 Have a great weekend everyone!﻿
Posted by Julia

The Gothic Shop is an online shop in the UK selling gothic clothing, accessories and jewellery. Our mission is to provide a wide selection of gothic clothing and accessories to our customers at affordable prices. Goods are dispatched within 24 hours (week days) because all items on the website are in stock.

Follow by email to be the first to read about discount coupons, sales, style ideas and competitions.